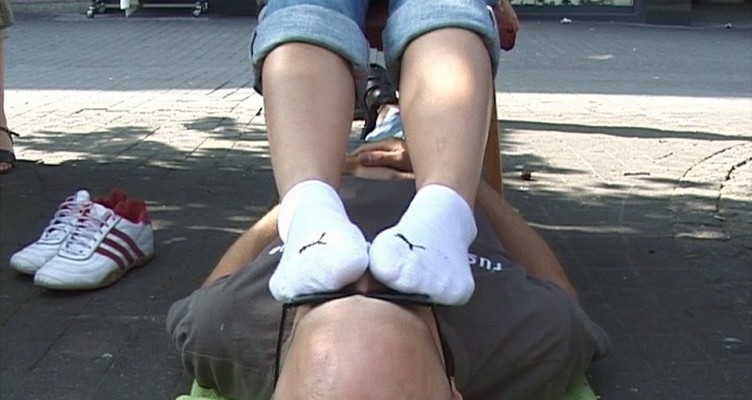 I think, this was the most freaky thing I ever did for fussphantasie! It is not exaggerated to say that this was never done before.

The story behind: Many foot lovers dream of being surrounded by many girls’ feet at once. This is a wonderful vision, but normally this won’t happen that often, if ever.
I talked to my best friend Michael about this dream I also had by myself and he said: Ok, then let’s do it next weekend

So Jutta, Michael and I drove to the pedestrian zone of Düsseldorf without a real plan. We had just a blanket, a stool and two cameras.
Jutta went around and asked the girls if they want to sit down and press their feet against my face.

Granted, we were all very skeptical, but the success was overwhelming! In summary not less than 27 girls said yes and put their feet in my face. Some with socks, some barefoot, the full joy.

It was so crazy and I knew that this would not have been the last time I do something like this, although I was almost sh*tting in my pants…

One side note though, as I was asked this many times: We didn’t plan this thing really well. Unfortunately we forgot to ask for the girls’ permissions to film their faces. Plus there is no original sound footage in this clip, just selected music. Despite that, this is a milestone!