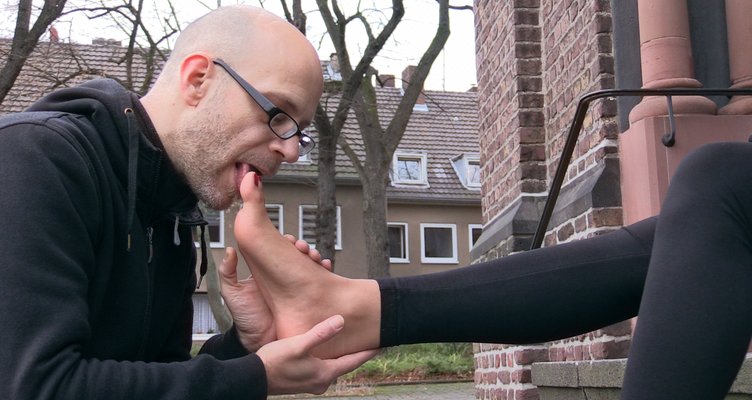 This clip had to be released today, Valentine on Valentine’s Day!

In between the Under Feet series, I’m often thinking about which clips I could produce with my models, especially which model would be the best for a certain kind of clip. In this case Valentine came to my mind.

It is a simple story: Valentine had a small stone in her socks and tried to shake it off after removing her Ugg boots. A guy was observing this scene and decided to ask Valentine if she likes to sell him her socks.

But you know, this would have been too simple.

Valentine wanted the money for sure, but in addition she even told the guy to lick her sweaty feet clean. On the street, in front of this church door, where many people walked on by constantly.

After a few moments of consideration the guy started to caress Valentines feet with her tongue. He licked her soles clean, sucked Valentines toes and removed thoroughly every single lint from her feet.

In the end he gave Valentine the money as agreed and went away with his “new” socks.

Enjoy Valentine in her first video ever made for us – 9 minutes full of licking joy, Happy Valentine’s Day