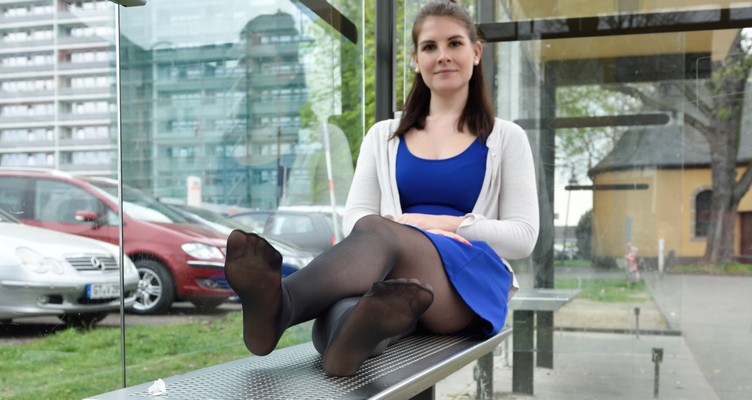 Walking in a supermarket without shoes 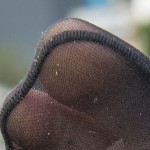 Outside photo series are much fun. It is the kind of normality I like to transfer to our passion, although it is quite rare to see a girl walking through a REWE store with black nylon pantyhose only. 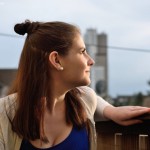 With Patricia I can do those things without thinking too much. She is brave, doesn’t give a f*ck about people surrounding her and I’m the guy who is just doing things until someone comes and says “Get out of it here, now!”

So after drinking coffee, we went outside and I started to shoot Patricia. She was wearing a blue dress, black pantyhose and well worn old Keds with flowers on it. At first we stopped at a bench, which was randomly standing on the sidewalk. I really don’t know what the purpose of it was, maybe just waiting for us to use it.

Then we went to an ATM, used a bus stop for some photos and finally visited the store. Patricia took a caddy and we bought some things I needed anyway.

We had to be quite fast, because not Patricia was the obvious attraction, but me crawling on the ground with my camera

I don’t know if a detective was following us on his monitors, but at least no one came to us and stopped the session.

As of now, this is the first Premium Photo Set with my new approach. It contains all 84 good pictures from the shooting in addition to 12 perfectly developed high quality pictures. The toe photo at the top is a 1:1 crop of the real image.