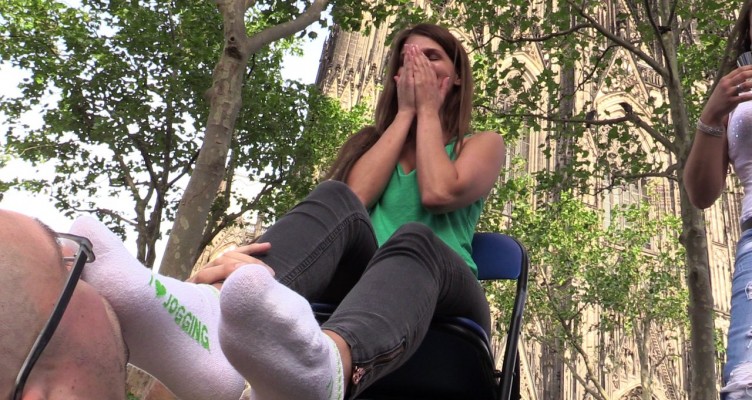 It lasted 5 years to do this crazy project again!

The feedback to Under Feet: Amsterdam was gorgeous. We had press interviews, media inquiries and mentions in local webcasts, but I was somehow burnt out after that. I thought, there would be no chance to put a project on top of this success again.

But time goes by and many changes happen. I got some new ideas and my greatest wish since then was, not to lie down under a chair but to film myself. So we did a small casting and discovered Fritz, a patent guy who sometimes is considered as my brother.

We planned this new project to happen in the prettiest town of the world, my hometown Cologne, directly beneath the famous dome! This was an astonishing view from all sides, especially from under the chair.

We filmed two whole days, one day with Fritz under the chair and on the second day I could not resist to lie down again.
Shirley and Marion addressed many girls at the place in front of the dome. My best friend Michael and I handled the cameras. Technical info: We filmed this project with three cameras at once, so you’ll get the best views.

In summary we were supported by 21 wonderful girls. A big thanks to them, because without those girls such a project would not get a life. Every member of the team enjoyed the conversations and the laughs, we had a wonderful atmosphere.

In the end my greatest wish is that this film will be another worthy contribution to the discussion about feet in general. I hope that many girls just stop feeling ashamed of their feet and vice versa the guys start to stand to their passion. The life would be so much easier.