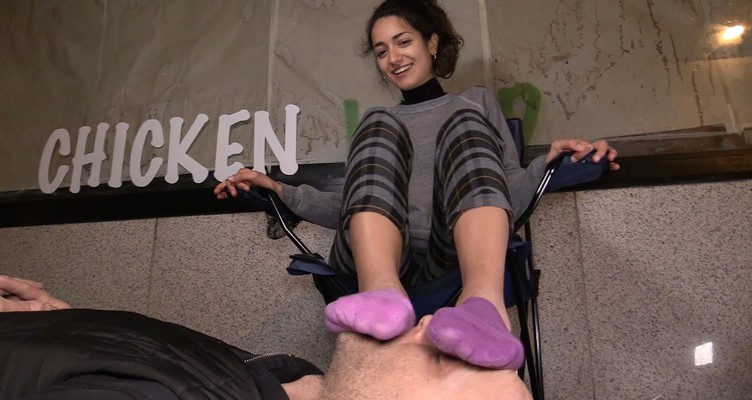 The working title was “Club Feet”, but read on…

You followed me for months and indeed we planned the new project going to happen in July in another country again. Everything was booked but then the rain started, two days before our journey. As if this was fate, we had the summer of the century and just in this small time slot it rained like waterfalls.

In addition Fritz had only a few temporal possibilities to film with us, so we decided to do our Plan B – the club feet. In our fantasy this was a gorgeous idea: Girls taking their shoes off after dancing.

But the reality was a little bit disillusioning. I have to admit that I thought “Ok, this can be difficult and maybe this doesn’t work”, but it turned out that we didn’t calculate how alcohol and drugs work at night

Sure, we considered some laughter and grouping of people, but at night 1 we were surrounded by some really bad people at times, completely antisocial and a few ones behaved somewhat aggressive. Our mood hit rock bottom.

At night 2 we moved on to other places near some clubs and this was fun. We were happy and knew that the project would work now. In addition we made a night 3 and this was completely relaxed. There we met some girls from a party boat and from a trade fair.

Now you know why this was one of the hardest and most work intensive projects. I had to cut out so much bad material to let the 18 girls shine who helped us and had much fun participating. Now I’m satisfied and now I know, that everything will work if you plan ahead. But you have to choose your places wisely and avoid some of the really bad streets where people like to drink alcohol to get in coma

This time Fritz handled the camera only, I was the lucky one who could lie down. Alessandra joined us for the first time and made a very good job on the second camera and especially with talking to the girls.

As ever, a big thank you to all the wonderful girls we met! Without them such projects aren’t possible at all and I hope that this will be a further chapter in breaking taboos about feet

For the ones who are interested in the soundtrack of this video, here is the Spotify playlist:
http://bit.ly/uf-night – enjoy mates!